To the test object, a direct current ( DC) is applied, which is much lower than the breakdown voltage. A DC voltage is used to rule out capacitive loads.

The amount of the measured voltage must correspond to at least the amount of the operating voltage. The measurement is performed in the order of the protective conductor (PC) to neutral (N) and protective earth against all external lines (L1, L2, L3).

The effluent stream about the test object is measured, and the result is specified in kOhm, milliohms or TΩ. The measurement is based on Ohm’s law U = R * I. The measurement is non-destructive in the normal case and is performed with an insulation tester (also known as a Megohmeter).

The result of the measurement is influenced by a number of factors (for example temperature, humidity).

The current flowing through the insulation body current is in this case composed of 3 components: 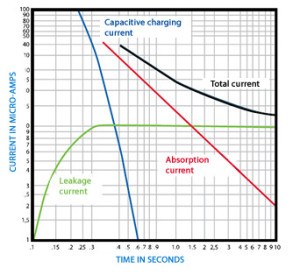 It flows so that the molecules within the dielectric- of which the insulator consists – reorient the electric field and plays a role for longer than the capacitive charging current. The absorption current reaches 0 after a few minutes.

Since the total current is composed on the test object from the three sub-streams, it decreases strongly with ongoing time measurement.